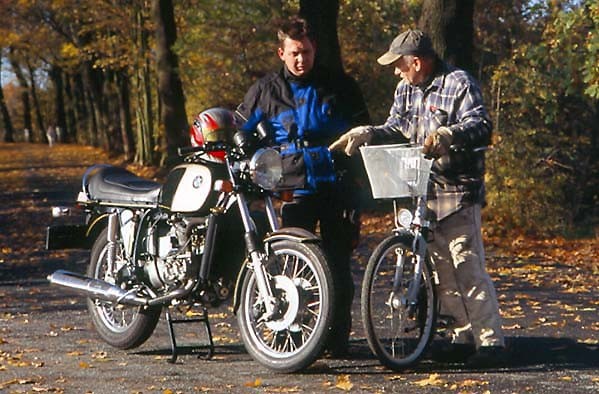 Normaly, Berlin is the motorbike city of Germany. End of the sixties the bike production moved from the Isar to the Spree. Secretly two prototypes with a two-stroke boxer engine were created, but a serial production did not work. This story had been almost forgotten. The ex-racing boat champion Peer Krage had perfectly restored the König BMW 500 touring in the year 2007. 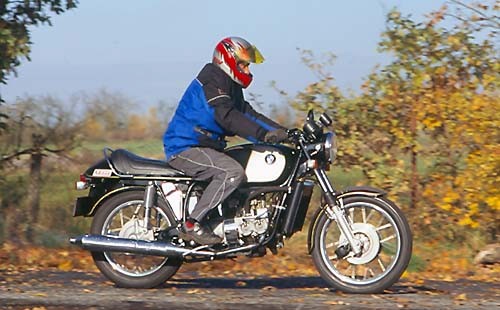 There are motorbike stories which you cannot imagine, even not on the 1st of April.
Not only why the fun ends with it. Honestly who will believe the joke? New BMW with a two- stroke engine? Nobody! Even in the quiz show of Günter Jauch you can ask this but you will not get the million.
Peer Krage smiles : “We had almost forgotten our 500 König BMW. My father granted the motorbike to a museum and after his death nobody thought about that in our family. At the end of 2006 I went to the Baltic Sea to check if everything is okay, but the museum was nearly dissolved and the König BMW stood in a shelter. Its condition was very bad. On my way home I planned to renew it.” 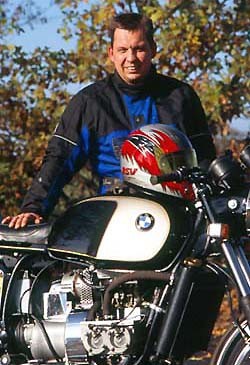 The König BMW stood in a shelter at the Baltic Sea and almost this protoype had been forgotten.
Peer Krage, the master mechanic, is a perfectionist in car restoration. Since 1961 the family business had been specialized in Porsche,as a free Porsche garage in service, tuning and restoration. The 40 years old expert for Porsche, the enthusiastic motorbike fan and race boat champion with the German, European and World championship leader learned his mechanical art from scratch.” It is hardly possible for me to separate job and private life. I had been fascinated by the Porsche technique since I was a child. I preferred two-stroke engines for motorbikes and for the racing I had my successes with the König two-stroke engines. My father was a good friend of Dieter König and I growed up with his same old son Peter König. We were like brothers.”

Dieter König in the seventies in his engine factory. 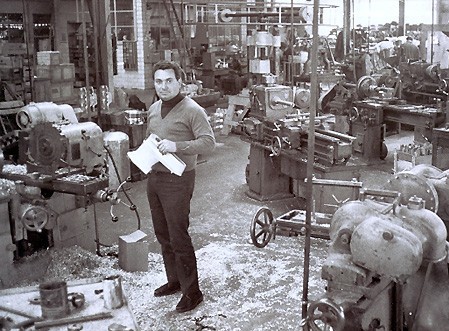 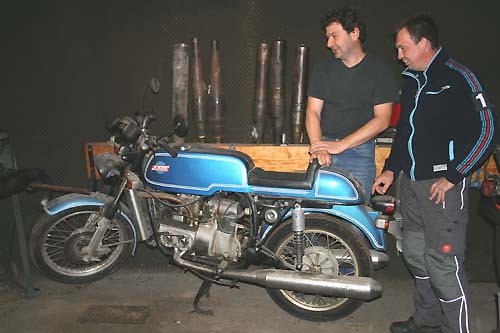 Due to this know-how the König BMW shall be soon in best shape. At first it shall be only an optical refreshment, but it needed a total restoration. Hubs, wheel bearings, torque arms, rims, frames, tank, seat bench, fittings and all painting parts were totally decayed from the salted climate at the Baltic Sea. The alu boomed, the steel was rusty, the chrome parts had cracks and the paint was blistered. The motorbike was totally dissembled up to the last screw and had been restored part by part. The parts were polished, new painted or chromium coated. The wheels got new V2A spokes. We replaced the gear suspension. There was no problem to get the wear parts. The chassis was one of the BMW R90/6 series. 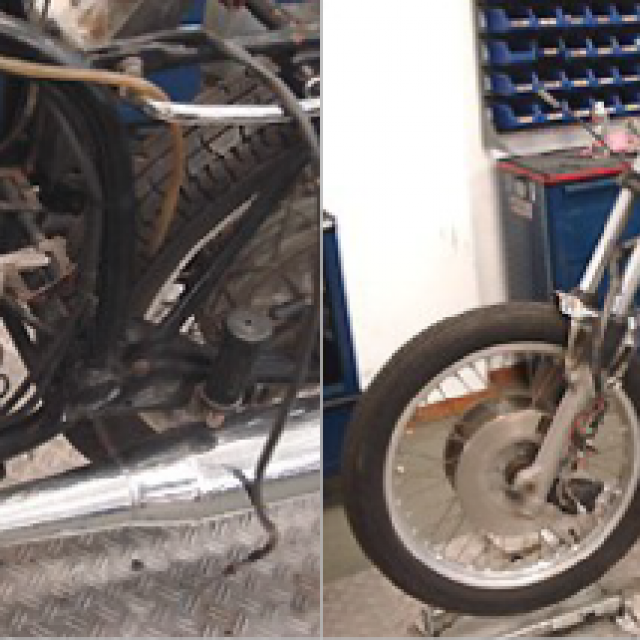 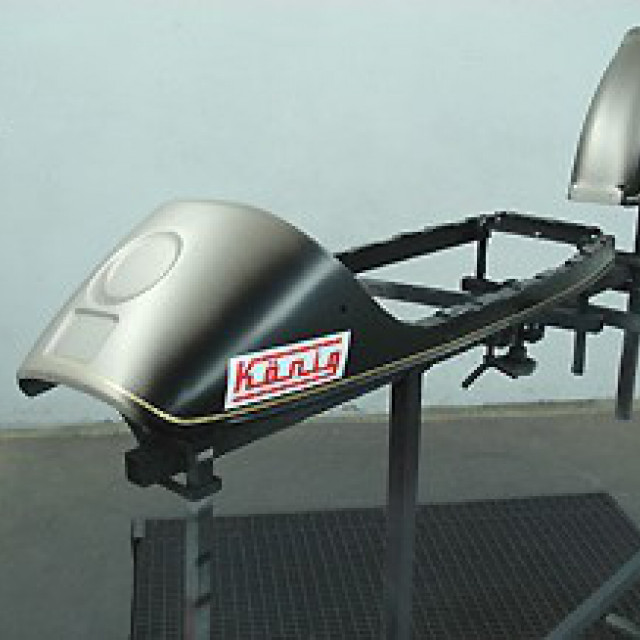 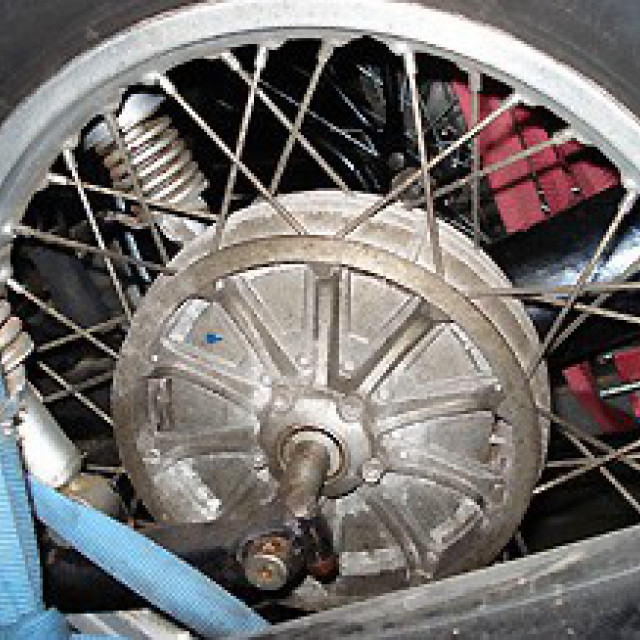 What outsider did not know was the meticulousness with which Peer Krage put in details with the assistance of the König expert Uli Rochel. The König BMW is a prototype which had been restored by a mixture of mass production elements and handmade elements. The image of this only unique shall be absolutely preserved. Modifications, which are taken for granted today, had not been considered. And the electrical water pump stayed at her place on the left side, water hoses and cable conducts are functional. If the visual appearance was important you can install them much prettier. 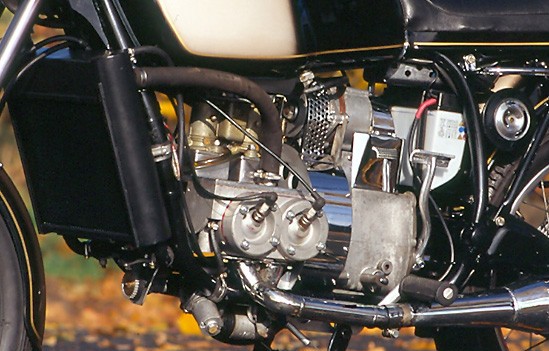 A real challenge was the motorbike typical operational reliability of the water-cooled four- cylinder two-stroke boxer motor. Peer Krage told us: ”The aggregate built for racing boats has no closed cooling circuit. During the race the waterway is doing the essential cooling by flowing through the engine. After carefully restoring the engine and after assembling the motorbike we found out by testing the motorbike that the engine lost water.” 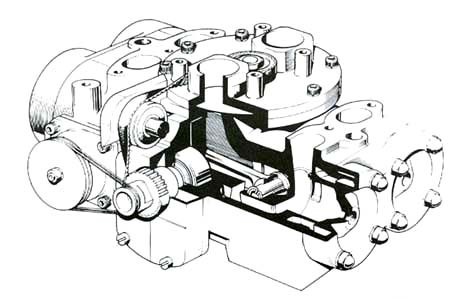 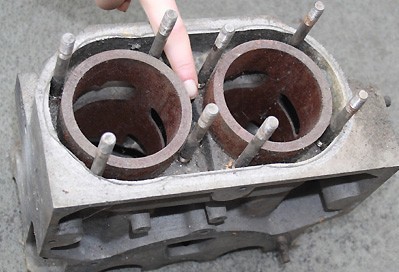 left: König-racing boat gear – The water-cooled four-cylinder two-stroke boxer engine was the basis for this gear in the König BMW Touring 500 (Photo: factory)
right: Raw cylinder before the restoration and the sealing

For a better sealing from the cylinder to the crankcase I grooved on hand a nut for an additional gasket material around the cylinder liner. The effort shall be worthwhile. The engine is hundred per cent leak-proofed and went like clockwork. Besides the technical matter the restoration was my heartfelt wish. One reason was the respect of the three BMW workers Biedermann, Milarch and Wall which built up the motorbike as well as of the genius motorbike constructor Dieter König and in memory to my father.” emphasized the friendly Berliner. 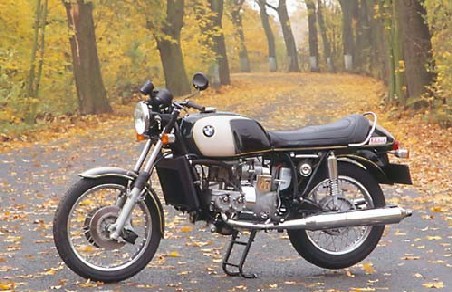 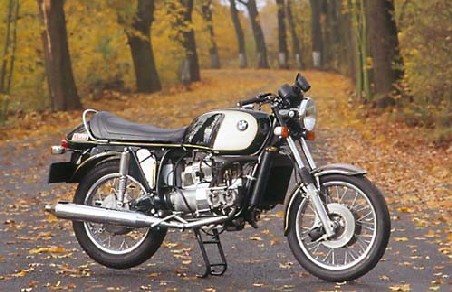 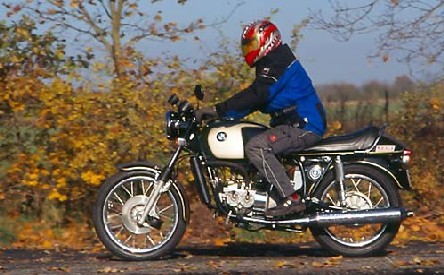 Beginning of the seventies a brand loyalty was obliged, especially for the BMW-range. They did not like any two-stroke engines. That caused a lot of trouble. We had a great motorbike boom started by an invasion of Japanese bikes. We remind us on the milestones CB450 and CB 750 from Honda. And we had the two-stroke rackets Yamaha RD250 and RD350, Suzuki GT380, GT550 and GT750 “Water buffalos” and of course the Kawasaki 500 H1 ”Mach III” and 750 H2 “Mach IV”. 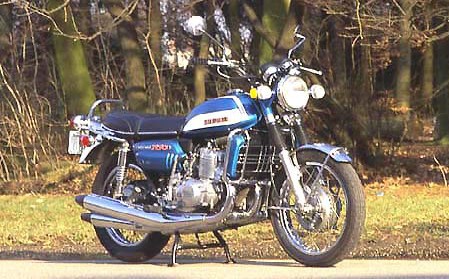 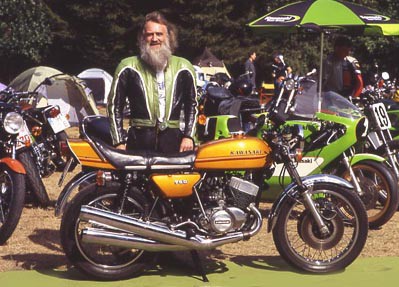 BMW believed also in motorbikes. 1969 presented the Bavarians the new 5 Boxer models. At the same time the motorbike production moved from Munich to Berlin-Spandau. Pioneering spirit and team spirit made the work climate at the Spree and then it was usual in the motorbike scene to discuss a lot what you can improve. The Berlin people did not have any voice. Construction, development and tests of the BMW motorbikes stayed in Munich. In Berlin we had a further motorbike producer in Berlin, the boat engine producer König. At that time this small business built sensational races. Ernst Milarch responsible for the constructin in the BMW mill followed the racing activities from Dieter König with great respect. The fan of the two-stroke met the owner Dieter König several times and had 1972 the crazy idea to
build the water-cooled four-cylinder two-stroke boxer engine in the new serial BMW R90/6. The both two-stroke experts were convinced: the skill of the Japanese had the people in Berlin long time ago. The site supervisor Ernst Milarch presented this business idea to the general manager Prof. Kramm of the BMW group. He was interested in this proposal and after getting the okay from Munich the general manager Mr. Kramm gave the green light. 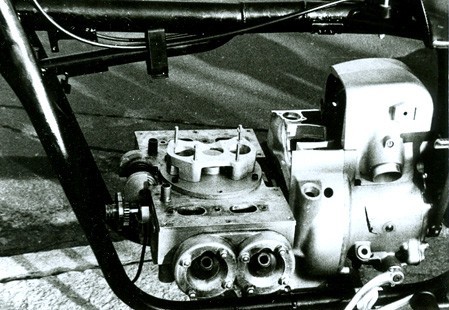 Martin Biedermann, responsible for the painting and Horst Wall, responsible for the maintenance were two very engaged and competent collaborators. They discussed, constructed and screwed only after quitting time. They agreed very quickly about their “Private fun”. They intended to built the 350er in the sport engine, the 500er four-cylinder two-stroke boxer motor in the touring bike. The R90 frames were sawed and extended with pipe fittings of about 60 mm. The König boxer engine was mounted with an intermediate adapter to the BMW gear. This was important due to the fact that most of the different
components beside the engine and the ancillary units of the BMW R90/6 shall be maintained. The main challenge was to adapt the high ambitious racing gears by new exhaust systems, carburetor and air-filter housing on the public road traffic. The boat engines running with methanol were only constructed for top performance. The 350er aggregate achieved 95 horsepower and the 500er engine 150 PS by the way. Instead of a rotary slide valve powered by the gear belt, Yamaha membrane valves had been taken. The team decided to use a
Solex-electrical twin carburetor for the mixture control. For the both street bikes we had a
great result: the 350er sport achieved 50 hp, the touring version 67 hp. Not even the dreaded
500er Kawasaki “Mach III” had such a great power. 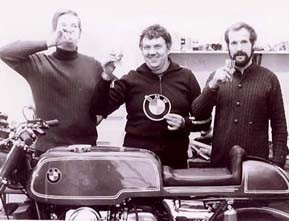 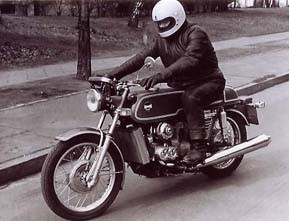 After around one year both prototypes were ready 1973. Biedermann, Milarch and Wall, named “BMW” were proud to present their dream bikes to an official delegation in Munich. The people of the development department and the Managing Board were very surprised, but were not convinced: “ A four-stroke boxer engine belongs to a BMW like the Bavarian veal sausage belongs to a pretzel”, was the opinion of all. The BMW König had never been built as a mass production. But everybody of the “BMW team” got a silver watch. 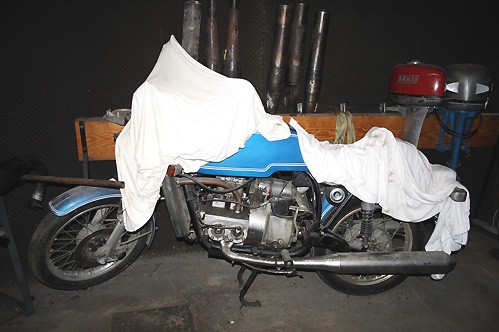 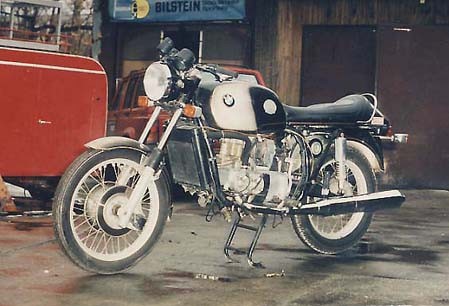 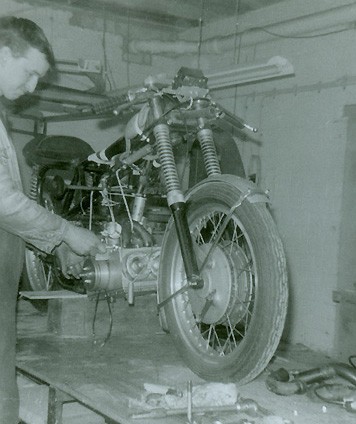 Dieter König was an allround genius. He was constructor and powerboat driver with world champion in personal unit. 1970 was the first time when you talked about the real König race engine when the unforgotten New Zealander Kim Newcombe entered in the company as constructor and company’s race driver. Until mid of the seventies more than 100 König race engines for solo and twin motor bikes had been built. In national and international street championships many titles had been won. 1973 Kim Newcombe was vice-world champion in the 500er class, 1975 and 1976 Rolf Steinhausen won with his assistant driver Josef Huber the team world champion. 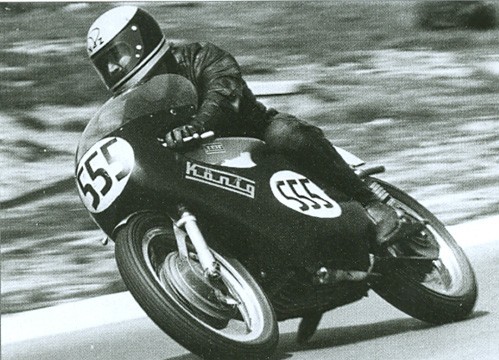 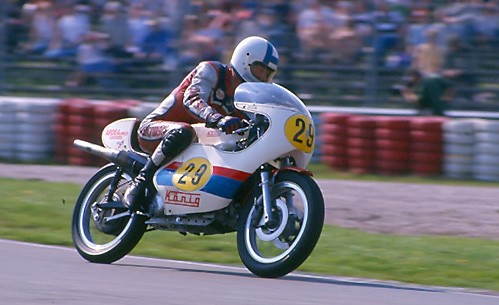